By: admin
In: Politics

university was shot and injured by an armed minor at an anti-Citizenship Amendment Act (CAA), 2019 protest in front of the university.

The same day, news agency ANI tweeted a CBSE (Central Board of Secondary Education) All India Senior Secondary Exam (AISSE) mark sheet saying, “Delhi: CBSE mark sheet of the allegedly minor gunman who brandished a gun and opened fire in Jamia area, earlier today. One student was injured in the incident.” As per the mark sheet, the shooter’s date of birth is April 8, 2002, and is hence, a minor.

The mark sheet ANI tweeted had the name of the student, his roll number, parents’ names blurred so that the minor’s identity is not revealed, as per law.

Since the time ANI put out the mark sheet, there have been many Twitter users who raised suspicion on its authenticity. For instance, a Twitter user by the handle ‘@chhuti_is’ tweeted how as per the CBSE website, the school in question doesn’t have any students enrolled in Class IX and X. 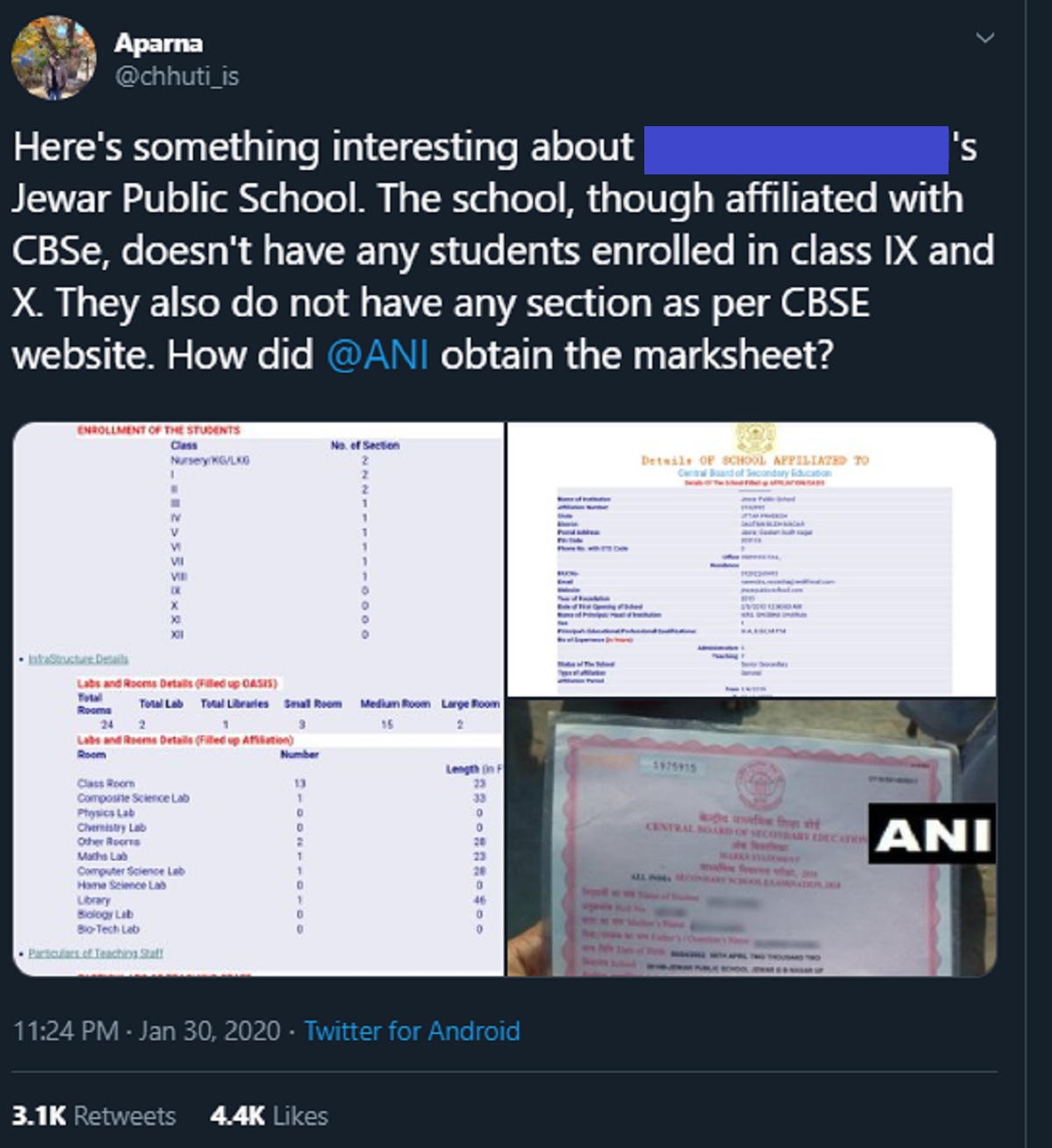 The same user, in another tweet, said that code of the school as per the CBSE website is different from what’s printed on the mark sheet. 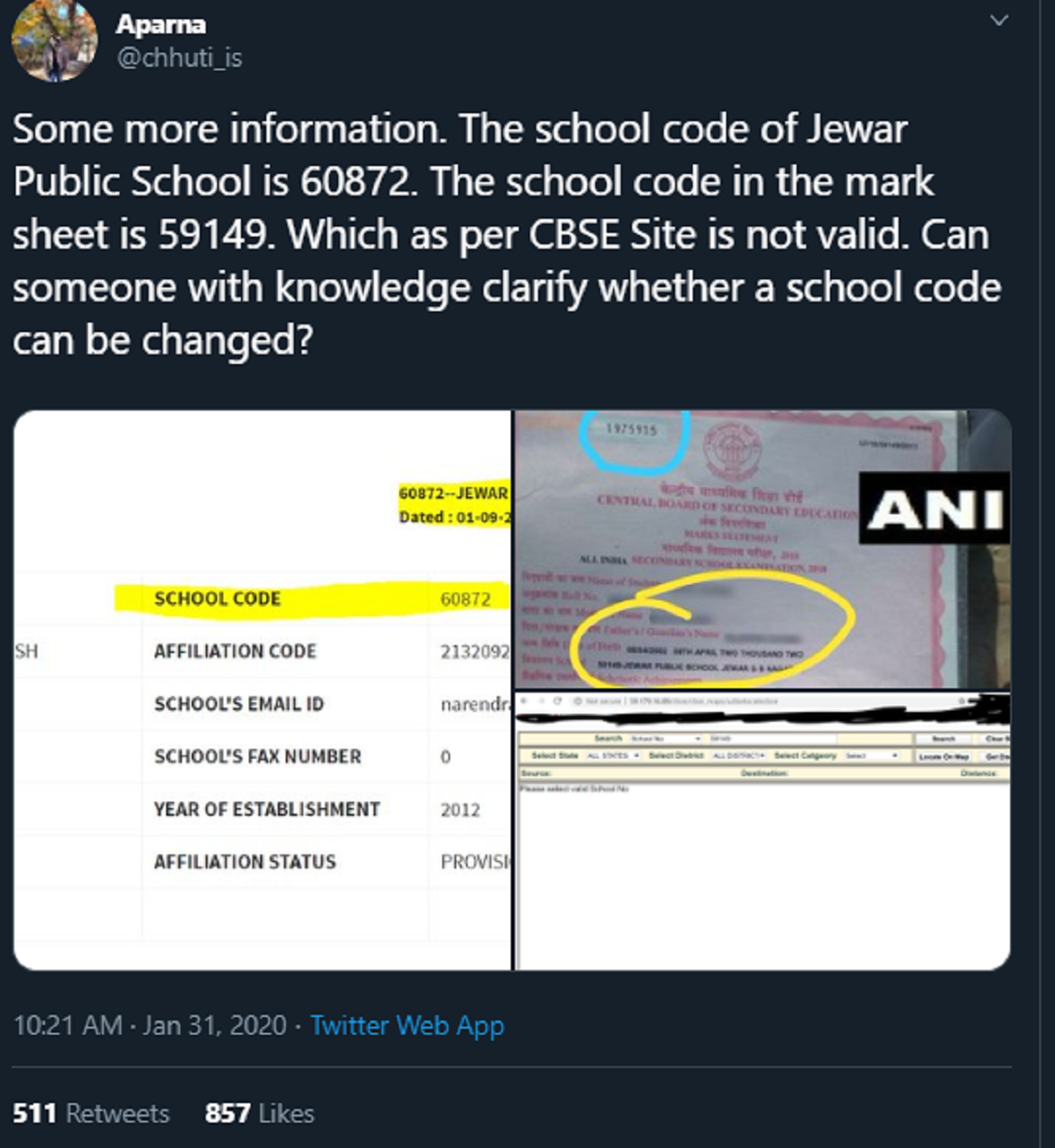 Another discrepancy noticed by Twitter users, and pointed out by the same user, was about the grades printed on the mark sheet – that the grades corresponding to the marks obtained by the students were not as per CBSE’s grading system. published a blog post detailing how Krish Ashok, a techie and musician as per his Twitter bio, used

the image of the mark sheet, and suggested it could have been digitally altered.

I know it is Budget Day. I know you want to know just what the government intends to do to get us out of the mess i… https://t.co/jlanxv7s4A

Meanwhile, some Twitter users have been sharing a screenshot with a title ‘Voter Information’ with a claim that it is of the student shooter in question, arguing he’s 20 years of age. For instance: Times Fact Check tried to verify the authenticity of the mark sheet of the Jamia shooter ANI put out.

, the manager of the school in question, who also claimed he’s been teaching Physics for the last 30 years. When asked about the authenticity of the mark sheet shared by ANI, Sharma said, “It is 100 per cent authentic and of the student in question.”

Sharma also told Times Fact Check that the student went to school last, three days before he went and opened fire at a protesting student at JMI, and said his mother had called him home since they had to attend a wedding.

, who reported about the juvenile in question on January 31, 2020, in a tweet, said, “Confirmed by school authorities that it is legit,” responding to a Twitter user who raised a question about the authenticity of the mark sheet.

@sarvarta @almatharu Confirmed by school authorities that it is legit.

Times Fact Check got in touch with a CBSE spokesperson. Responding to the claims made above, the CBSE spokesperson wrote to us saying, “The mark sheet above belongs to *name of the student* and the school is affiliated to CBSE.” Addressing the discrepancies Twitter users have pointed out in the grading, the spokesperson said, “This is not fixed and varies from subject to subject depending upon the highest and lowest cut of marks in a subject in a year. So upper 1/8 gets A1, next 1/8 A2 and so on,” and that the details about this are available on the website.

The spokesperson has not responded to the question about discrepancies in the affiliation number / school code on the mark sheet and on the official CBSE website.

Times Fact Check also accessed the Aadhaar card of the shooter in question. As per his Aadhaar card, the date of birth is the same as that on his CBSE mark sheet.

, there are a total of 16 people with the same name as that of the shooter in the voter list from Jewar constituency, none of whose details match with those of the juvenile in question.

This is a different Gopal Sharma. Father name given here does not match with the Juvenile’s father name as per reco… https://t.co/5vgzqdwNkR