Coronavirus has spread from Wuhan, China, to countries across the world. But how do you know you have it? Here are some signs to watch out for. USA TODAY

Check back for updates as the rally unfolds.

Several commentators noticed something rather unique about the New Hampshire rally.

Trump spoke very rapidly, and wrapped up in little more than an hour, shorter than most of his recent rallies.

There may have been a reason for this: Fox Business Network announced earlier today that it would broadcast a pre-taped interview with Trump on host Trish Regan’s show.

Sure enough, Trump ended right at 8:02 p.m. – perhaps he didn’t want to compete with himself.

Donald Trump brings back ‘The Snake’ at his New Hampshire rally

You know the election is getting close – Donald Trump brought back “The Snake” on Monday night.

A poem that Trump recited frequently during the 2016 campaign,”The Snake” is an anti-immigration parable about a charming viper who talks a woman into letting him into her home.

The snake then bites her.

“You knew damn well I was a snake before you took me in,” the snake says at the end of the poem.

Based on a 1960s song by Al Wilson, “The Snake” is likely to make a few more appearances on the campaign trail before Nov. 3.

The president continued to suggest the Coronavirus outbreak, which has claimed 1,000 lives as of Monday, will be gone by April. He told the crowd that “in theory” once the weather warms up Coronavirus, which he referred to as “the virus,” will “miraculously” go away. Trump did not offer any scientific explanation to back up his claim.

Trump echoed that claim during a speech to governors at the White House earlier on Monday, telling the group that China had given him the confidence that the outbreak would subside in Apri due to “the heat.”

“The heat generally speaking kills this kind of virus,” he said.

Trump: ‘We should impeach President Obama’

During a long stump on healthcare, Trump said Republicans “should impeach President Obama” for his promises about health care.

President Trump introduced members of Congress and his family as “warriors” Monday night, largely highlighting their support during the impeachment trials.

He thanked Senators Lindsey Graham, R-S.C., and Rand Paul, R-KY., to cheers of “USA” from the audience.

He continued to introduce Rep. Kevin McCarthy, R-CA., as “Speaker of the House, hopefully, next year.”

“Wouldn’t that be nice?” the president continued.

Trump introduced Rep. Steve Scalise, R-LA., by retelling the story of when the congressman was shot during the 2017 Congressional baseball shooting.

Trump said he told Scalise his wife loved him because “she was devastated, I know many wives who don’t get too upset.”

Trump brought Ivanka onto the stage, saying she is someone “not many people know” but continuing she is, “Very powerful, very smart, very beautiful, even though I’m not allowed to say that because she’s my daughter, Ivanka.”

He continued to thank her husband, Senior Advisor Jared Kushner, for making deals “that are so good for this country.”

A supporter of US President Donald Trump cheers as he hears him speak during a rally in Manchester, New Hampshire on Feb. 10, 2020.  (Photo: JIM WATSON, AFP via Getty Images)

As he has done in previous rallies, Trump talked about record employment statistics for African-Americans, Hispanics, and Asians, and said his administration is looking out for those groups.

“We are the party of equal opportunity for all Americans,” Trump said, while Democrats are “betraying” them.

“They betrayed all of us,” Trump said.

Democratic candidate Hillary Clinton carried 89% of the African-American vote and 66% of the Latino vote against Trump in 2016.

Trump hit his Democratic opponents on the Iowa caucuses debacle, saying Monday, “They’re all fighting each other, they’re all going after each other. They can’t even count their votes.”

In doing so, multiple candidates claimed victory and many campaigns turned the fight towards one another leading into the New Hampshire primary Tuesday.

Trump said Republicans should get out and vote for the Democrats”http://www.usatoday.com/”weakest” candidate, helping him or her win the nomination so that the president can presumably have an easier time in the fall.

“Does that make sense?” Trump asked.

Trump did not make specific suggestions as to who his backers should vote for, saying he can’t figure out which one is the Democrats’ weakest candidate.

There is cross-over voting in New Hampshire, and parties have been known to mess with each other in the primary.

In his first campaign rally appearance since the Republican-led Senate voted to acquit him on charges of abuse of power and obstruction of Congress, Trump wasted little time in railing against Democrats for wasting the country’s time with the “impeachment hoax.”

Trump boasted of his “full and complete and absolute total acquittal” in the Senate. “And it wasn’t even close,” he said as the crowd cheered.

“Other than Romney, we got 52-0,” he said of Senator Mitt Romney, R-Utah, the only Republican to vote against the president during the Senate trial. The crowd began to boo as Trump mentioned Romney’s name.

New target for ‘Lock Her Up’ chants: Nancy Pelosi

As at numerous other rallies, President Donald Trump’s backers in New Hampshire are chanting “lock her up!” – but this time they have a different target.

Rather than Hillary Clinton, Trump partisans are yelling “lock her up” at House Speaker Nancy Pelosi.

The chant surfaced when warm-up speakers criticized Pelosi over the impeachment investigation.

Some people wonder if President Donald Trump’s son will want to follow in his father’s political footsteps someday.

Some Trump supporters apparently want him to.

His successor will be president number … 46.

In an early Monday tweet Trump said he wanted to “shake up the Dems a little bit” ahead of the primary, which he referred to as a “really boring deal,” while also calling out the “big crowds” that are expected to greet him in Manchester. Trump’s rally is expected to begin at 7 p.m. EST.

The president’s supporters began lining up for the “Keep America Great” rally Sunday, according to the Union-Leader and video shared online, braving the cold and rainy weather to attend Trump’s first political rally since he was acquitted of impeachment last week in the Republican-controlled Senate.

The president will be joined by Vice President Mike Pence and several other campaign surrogates who are aiming to steal the spotlight from several Democrats vying to take on Trump in November. The campaign counter-programmed Democrats last week with a campaign rally the day before Iowa’s first-in-the-nation caucuses, where the party is still having difficulty declaring a winner follow the malfunction of a cell phone app used to report results.

Will be in Manchester, New Hampshire, tonight for a big Rally. Want to shake up the Dems a little bit – they have a really boring deal going on. Still waiting for the Iowa results, votes were fried. Big crowds in Manchester!

Democrats spent the weekend barnstorming New Hampshire in their final push to court voters ahead of the primary, which begins at midnight Monday in the township of Dixville Notch. A new Quinnipac University poll Monday showed Sen. Bernie Sanders, I-Vt., taking the lead with 25% over former Vice President Joe Biden, who trailed at 17%. Former New York City Mayor Michael Bloomberg was close behind at 15%, after seeing a surge in support.

The Republican primary is also Tuesday and Trump is expected to handily win over challengers Bill Weld, a former governor of Massachusetts, and Joe Walsh, a former U.S. House member from Illinois, who dropped his presidential bid last week. 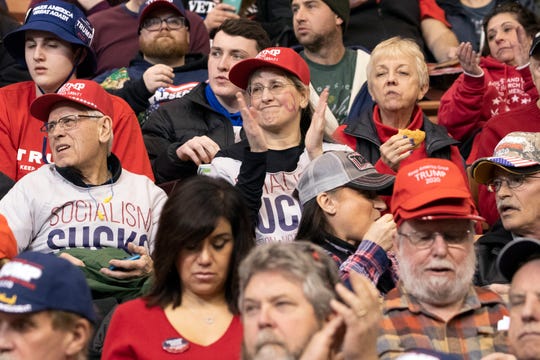 A member of the audience with a Q drawn on he cheek cheers before the start of a campaign rally for President Donald Trump, Monday, Feb. 10, 2020, in Manchester, N.H. (Photo: Mary Altaffer, AP)